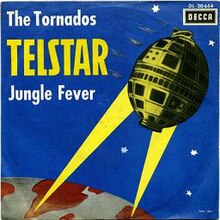 There’s something adorable about this little instrumental, one of those instrumentals you’d see in the surf-rock era, a little composition that goes on exactly as long as the melody can sustain it and then stops. It’s named after the first commercial comms satellite, and it’s got a rockets-and-rayguns kind of feel to it.

This is a significant piece of music in a number of regards. It’s got an early use of an electronic instrument (the clavioline that would later feature on “Baby, You’re a Rich Man” by the Beatles and probably “Icky Thump” by the White Stripes), it’s probably the first song we could call space-rock in good conscience, and so it’s an important precursor to the earlier acid-rock/prog-rock complex that would develop later in the decade, and finally, it’s the first US number-one hit by a British band. (Individual artists had had chart-toppers in the US before, but not many of them.) In a way, we can see this song as prefiguring the British invasion(s), although this might be a bit of an overstatement.

It’s got a troubled history, too. The producer, Meeks, later shot his landlady and himself with a band member’s shotgun, apparently driven to the breaking point by fear that his homosexuality would be discovered in a legal climate where he might conceivably be forced to undergo hormone treatment or else spend a long time in prison. (Alan Turing killed himself with a poison apple not too many years before under exactly those circumstances.)

The guitarist, by the way, was George Bellamy, father of the famous Muse guitarist Matt Bellamy. What I think of as their most famous song (though I’m probably wrong about that,) “Knights of Cydonia” is a bit of a Telstar tribute, with an intro section that copies part of the melody on a similar-sounding instrument, and a chorus that uses the melody as well. Still, given the choice, I prefer Telstar. Muse… well, they’re Muse.

The B-side is not particularly spectacular. It’s called “Jungle Fever,” and it’s about what you would expect to hear in a period British movie about brave white adventurers hacking their way into a savage jungle somewhere in Africa or East Asia. It has vocal effects at the very beginning and throughout that I want to imagine are supposed to be gorillas or other dangerous jungle animals, but I have this uncomfortable sensation that they’re the snarling sounds of the indigenous. Eesh.

So the A-side definitely wins.

All images claimed under fair use, all content reviewed property of its respective owners, all views and opinions mine. By reading this you have become my intellectual property.